JUNE 11, 2010.  PORT Elizabeth street traders say they are making a killing selling World Cup merchandise . Prince Makhani, who operates at the intersection of Govan Mbeki Avenue and Albany Road in the CBD, said the flags of England, South Africa, Spain, Brazil and Germany were selling like hot cakes. Ghanaian and Nigerian flags were also sought after. “I normally get about R1 000 and R1 500 a day,” said Makhani, who obtains his stock from a Johannesburg firm. “I go to Jo’burg four times a month.” John Churu, who claims the intersection of Cape and Greyville roads as his turf, said: “I have all the flags of the 32 participating teams. Business is okay (and) I’m sure of R800 a day. The last two weeks of May were good for business. It picked up a lot.” As Churu was talking to The Herald, Brazilian Ahmed Azad, a mechanical engineering student from Nelson Mandela Metropolitan University, came over to buy a pair of Brazilian car-mirror socks. The Rio de Janeiro native, who came to Port Elizabeth last year, said: “I decided to show my support for my boys by buying a pair of (mirror) socks.” He said the Brazilians would win the coveted gold trophy if they trained harder. “They lost out in 2006 because they thought they were too good.” Wineka Gonise, of Wells Estate, is one of the few women selling football gear at city intersections. Gonise, who sells hats and flags at the corner of Cape Road and Sixth Avenue in Newton Park, said: “I don’t follow football that much. I was selling fruit before switching to soccer merchandise. I saw the other guys were making a killing. I take home about R500 a day.” 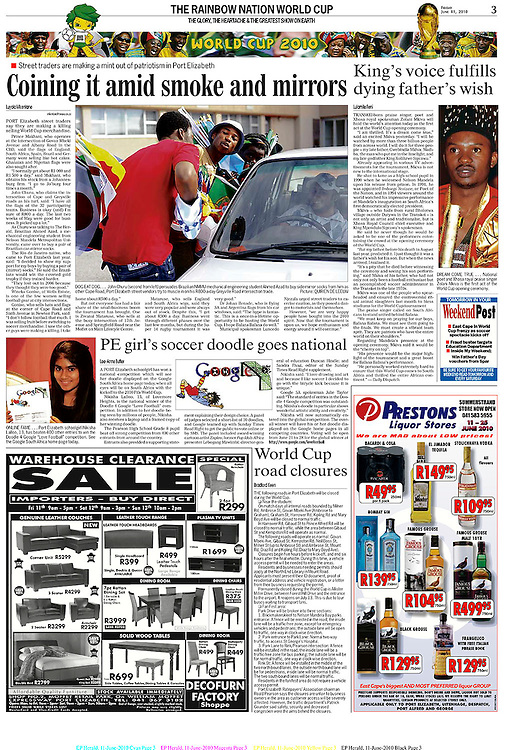